Can someone help with these marks 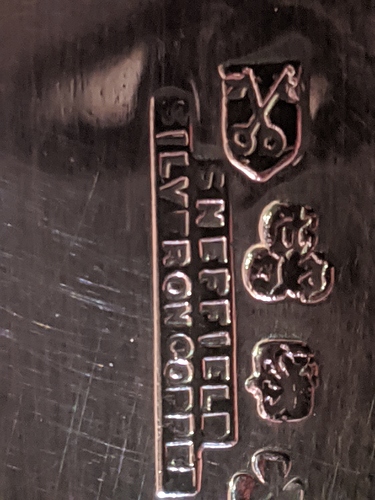 I don’t recognise this combination of marks but I can say that the juxtaposition of “Sheffield” and “Silver on Copper” makes it very likely that this is produced by an American company. Two of the other marks trouble me greatly.

First is the mark which appears to mimic the English sterling silver standard lion passant mark; use of this on English electroplate would contravene all hallmarking regulations.

Second the ec over p mark. This looks like a copy of the maker’s/sponsor’s mark of the London silversmith Edwin Charles Purdie. I can find no evidence that Purdie made electroplate, either in the UK or abroad (he died in London in 1920).

So, nothing definite apart from the obvious fact that it is not silver.