Hello, may I ask you to help me understand next hallmarks: 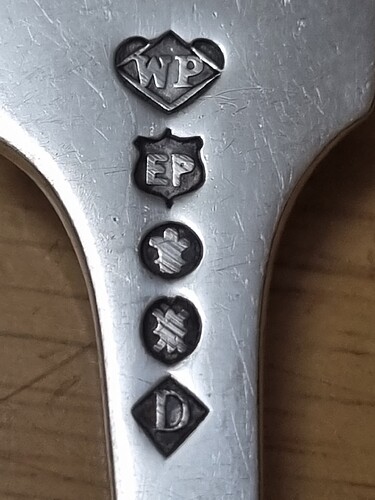 The EP mark shows that it is electroplate, which has manufacturer’s marks but not hallmarks which are only found on precious metal (silver etc.). The manufacturer here is William Page & Co of Birmingham. I don’t think that there is any way of deriving the date from the style of the marks so dating is probably going to be no more accurate than late 19th century to first half 20th century.

Thank you very much! WP and EP is clear now, but what about other marks, what does it mean?

They don’t mean anything - they are just part of Page’s trade mark.

O, i think at least there is a year of manufacturing.
Tnank you again!