Thank you for welcoming me to your site. I am a complete neophyte (actually, probably only an incomplete neophyte) but I am curious about a piece that I just came across. I believe it is a crumber or crumb tray. Obviously it is badly tarnished, but perhaps someone can make some sense of it.

It is monogrammed with a “C” on the top . Most of the marks on the bottom are as they appear on the piece, though in the right light one can see that it says “SILVER” then nothing legible til “PPER” at the end. Also, there is a letter or character just above the numeral “9” in “1697.” The character looks like an F in “Fifth Ave” font or a Roman numeral 2 (II), as it has two vertical elements and top and bottom lines but the center of the stampings is worn and hard to make out the letter, or if there are other, worn-off letters or characters following it. It would seem likely that there are other characters, as the “F” (if that is what it is) is not center-justified like the rest of the lines of text.

I am interested in its likely age and any other information about it; I would love to believe the 1697 stamped on the bottom is its date but I am more than a little skeptical. I have not seen this particular design of crown on any of the sites I looked at.

Thank you in advance for any information. 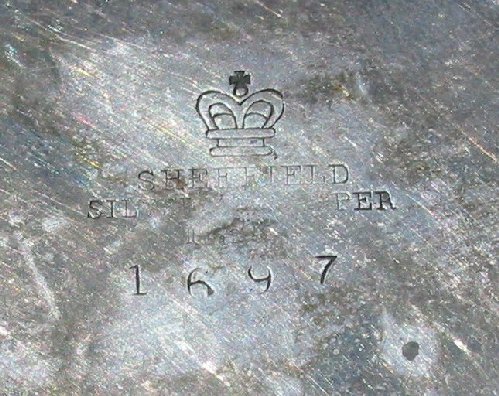 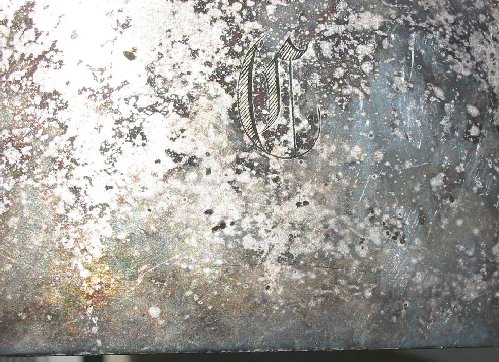 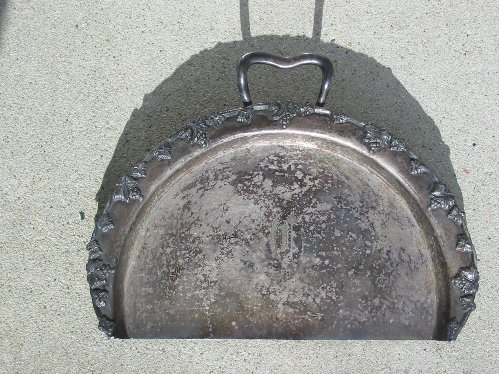 I agree with you that this is probably a crumber. I think that in all likelihood the text reads “SILVER ON COPPER”; i.e. it is silver plated. The numbers 1697 are most likely the pattern number. Finally the word Sheffield does not necessarily mean that the crumber was made in Sheffield. “Sheffield” seems to have been used as a generic word for electroplate in the USA, and also several companies used the word Sheffield in their names. I cannot identify the manufacturer of this crumber so cannot suggest a likely date.

The mark appears to be that of (or very similar to) the Goldfeder Silverware Company, Inc. of Yalesville, Conn, USA which was formed in 1932 and made silverplated holloware similar to yours. Their mark contains the words “silver on copper”. The number is surely at pattern or model number. The word “Sheffield” probably denotes a line of merchandise.