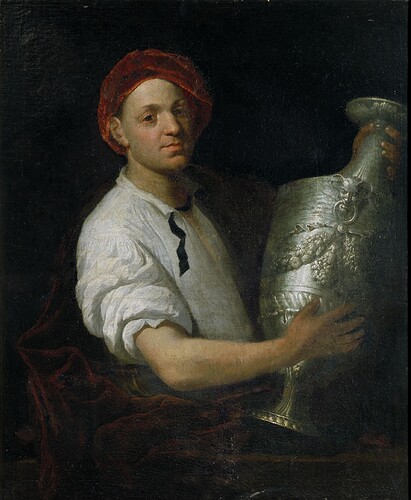 Part of that is his fault. He made such cumbersome thing out of such masses of metal for such odd people much of his early work seems to have disappeared.

A rather decent pair of casters of his showed up in an auction recently and that rekindled my enthusiam for the man.

Practically the first thing he made after entering his first mark was a huge bathtub for the King of Portugal’s mistress.

Unfortunately the King never got to hang with his mistress and the mistress never got to use the bathtub, because her Mother Superior told the young lady that this wasn’t the way for a young noviate to behave and God didn’t approve of really big bathtubs with mistresses in them even if they were made of silver. The bathtub not the mistress, That you have to go to Vegas for.

Yes, the King’s roving eye had lighted on a nun. Heavens only knows what the bathtub was for. All Nell Gwyn got from Charlie Boy was a table, a bedstead and a title.

Chagrined, the Portuguese King stuck the tub in the attic of his Lisbon Palace where it disappeared in the great Lisbon earthquake.

At least that’s the story.

Because Crespin entered his first mark. CR, shown at Jacksons. p.170, in the last year of the compulsory Britannia Standard and entered another mark, PC to comply with the initials only stipulation of the sterling standard his CR marks are few and far between.

And that’s the question. Does anyone have a CR mark and if so might they post it? If they can also shed light the King’s massive bathtub it might be time to 'fess up on that too.

This picture of Crespin is by an unknown artist and hangs in the V&A. It is reproduced here is permission of the V&A. The vase he is clasping has apparently disappeared too, along with the artist.