Could anyone please confirm my identification of this spoon?
I believe the hallmark shows: London 1838.
Makers Mark: William Bateman II ?
Length = 23cm
Weight= 73g 2.347 Troy Ounce
I am new to this game so unsure to its purpose. Other pictures on your site suggest to me it may be a Berry Spoon? But would that indicate it should have gilt plating to the bowl?
Is it posable for polising to have remove all signs of gilding,(could it be restored) if that is the case would this spoon be worthy of a place in a collection?

Many Thanks in advance and wishing you all a Merry Christmas . 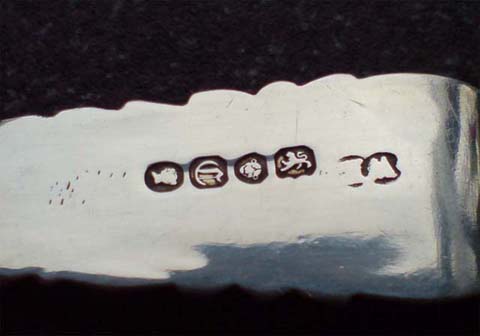 Type of spoon berry spoon - regarding gold plating - I dont think that every trace of gold could be removed. More likely there has never been gold plating at the spoon.

It is a Victorian Berry Spoon. It would definitely have been gilt on the interior of the bowl (infact you can still see traces of gilding in the bowl) and it is possible, easy and relatively cheap to re-gild. However, there is no particular need to do this.