V JAMET MEAN ANYTHING on cutlery

I have got a ladle, forks and spoons with the name V Jamet on them, the name is in a diamond shaped mark with three stars above the name, there is also a hallmark of a head.
Please advise if anyone can help, i cant seem to find anything on the internet, could it mean silver or plated, worth anything or not. Many thanks
De[/list][/list] 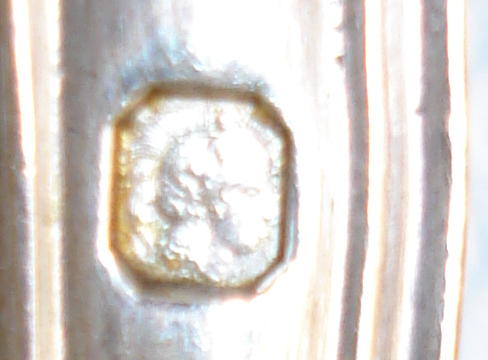 These look to be solid French silver. The head is a bit difficult to see, but appears to be the French minerva for 950 silver. I found a listing for an Edmond Jamet, who is known to have worked in Paris at 15 place Dauphine between 1831 and 1847. His makers mark is almost identical to yours, including the 3 stars. I suggest that V Jamet is likely his son. I’m afraid I don’t have any books devoted to French makers marks - see if you can get a hold of Tardy’s book on International hallmarks - you might find it there.

If you get a chance, I’d love to see a picture of your pieces! They certainly do have value, although you’d need someone with more specialized knowledge to be more specific.

I think there is a small E after the V in your mark.

When a widow enters a French mark she usually has the letters Ve (Veuve, French for widow)) added to her husbands mark.
For example, after Ernest Compere died, his widow entered her mark with the Ve letters.
See bottom three marks below.