Hi,
This hallmark is taken from a set of Fiddle Back tablespoons, but unfortunately all the hallmarks are the same and look as if the maker’s name has been overstamped. Does anyone recognise this at all?
Many thanks 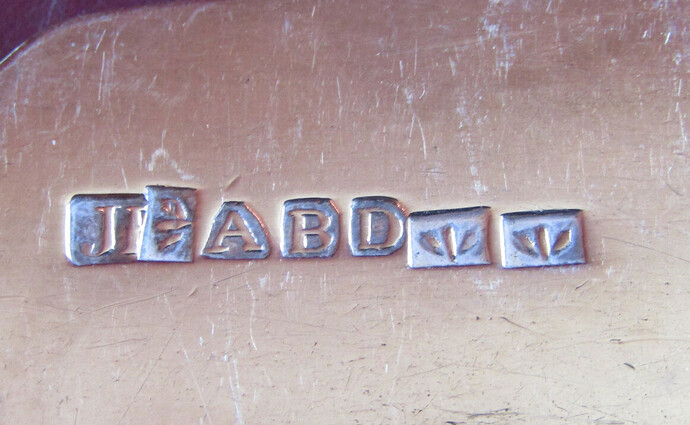 Needless to say, there are quite a few Aberdeen silversmiths with initials starting “J” and there are several who are known to have used that stylised thistle mark. As examples which also fit what we can see of the 2nd initial: John Booth (1821-1856), James Emslie (1844-1854). An illustration of Booth’s mark in Richard W Turner’s Scottish Provincial Silversmiths and Their Marks shows JB and one stylised thistle accompanied by ABD formed as in your picture.

Thank you for that, Phil, I’ll give them a check.
I’ve already through all the possibilities I could think of JB, JD JE JF, JL etc without any luck. I used to have a link to a fabulous site that seemed to have been dedicated to Scottish Provincial hallmarks, but can I find it?
All the best

Why however would the assay office in Aberdeen decide to overstamp its own registrant and paying customer? The first thought that occurs is it was some sort of competition between the Hammermen in the old guild and the new guild. (See Jackson’s useful discussion at p;. 580) a problem which wasn’t fully resolved until 1891.

You mentioned you have a set (perhaps six or twelve) Perhaps all the hallmarks are the same but given they are all hand-stamped or overstamped a review of them may reveal more clues. Perhaps more of the top stroke of the E is showing?
CRWW

Hello
I think that you’ve hit the nail on the head with Erskine! Many thanks for that. I should have said a ‘part set’ (only 4), and the overstamps are all very much alike.
All the very best 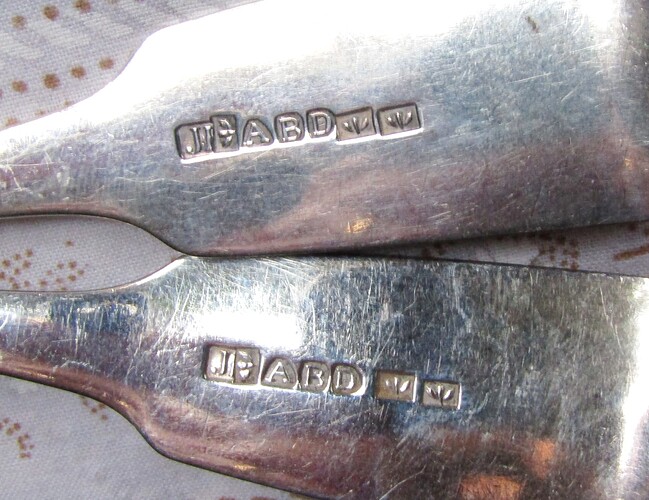