I own this silver gilt spoon, about 6 inches long. It has either a cherub or girl’s head finial, with a figure of a man with outstretched arms supporting the spoon body, with the reverse to this being what could be seen as the face of a Green Man (or similar) figure.

The marks seem to be possibly the Leopard’s head for London, with the Lion for Sterling purity. However, the date letter is in the wrong shaped shield for London. There is then Victoria’s head for the tax paid mark and the “X” for an imported piece.

The maker’s mark appears to be either Cyrillic or a bad imprint of some other mark - whatever it is, I cannot find anything to help me identify it on the web.

So, I’m asking anyone if they can help in any more information on this piece - is it London, or have I got this completely wrong? What would it have been for? Although the man could appear to be in a crucifixion position, it doesn’t look like it is a religious piece. 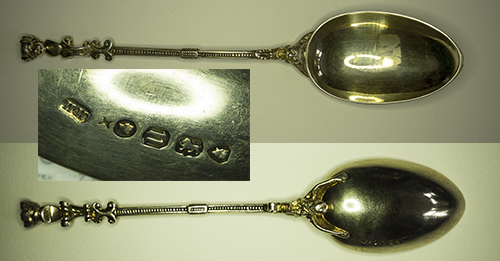 This is a London mark. The date letter appears to be “n” for 1868, but your picture is not very clear so I could be mistaken. The punch shape looks perfectly normal to me.

The little “x” is nothing to do with importation. Marks such as this are usually accepted to be journeymen’s marks; i.e. an identifying mark of the workman who actually made the item.

Your picture is not clear enough for me to work out what the maker’s mark is. Can you post a clearer picture of just the hallmark. I am sure we can identify the maker once there is a clear picture to work from.

Thanks for this. Attached is something that I hope shows the mark more clearly, and inset is the maker’s mark as crisp as I can get it.

If not, I will take a proper macro photo of it, symbol by symbol later…

OK - looks like I may have found the maker - it could be Henry Holland, 1875. There are a few photos of Apostle and other spoons that have the same sort of look on the web.

I will keep checking and feedback whatever else I can find out.