Hello Folks, Vic Roy (a/k/a Uncle Vic) here. I’m honored to be asked by the Franks brothers to moderate this section on American silver. I’ll attempt to answer any questions, and my policy is there is no such thing as a dumb question, so don’t be bashful.

American (U.S,) silver has no uniform marking system as oposed to the UK system. The customary standard for American “sterling” silver is 92.5% silver alloyed with 7.5% copper, the same as the UK standard. American sterling almost always bears the word “sterling” , “925” or “925/1000 FINE”. The rule of thumb is that if it does not bear these marks it is not sterling, with rare exceptions.

The various American makers each used distinct marks or logos. These are not technically “hallmarks”, as used in the UK, but rather referred to as “makers marks”. There were virtually no “date marks” on American silver, so dating it usually involves research into the history of the maker. An exception is Gorham, which used a date letter system for a number of years.

I consider the “golden age” of American silver, especially holloware, to be from about 1880 to 1920.

So fire away with your questions and comments, and let’s have some fun with our silver.

Please help identify the 2 pieces I recently purchased at an estate sale. I will provide photo as soon as possible. They are Gorham covered dishes that are oval in shape. They read “Gorham, EP (written under an anchor in pennant-shaped graphic), silver soldered, (02251 & 02253), (10” and 14") The platters also have the sailboat date mark. I’m not sure if this is helpful, but the larger piece has one large dot under the 14" mark and the smaller has three dots in a triangle shape under the sailboat. The only diifference in markings for the covers is that there is an acorn instead of the sailboat on the larger and an acorn and crown shape on the smaller. There are initials in a light script on each as well but I’m not able to read it.

Hi there Kelley, thanks for joining us here on silver-collector.com. Your items are Gorham silver plated and the acorn mark is for 1924 and the sailboat is 1926. I could not find your pattern numbers listed on replacements.com to give an estimate of value.

Hi…I have bought,but not yet received so no photo a siver bangle with STELING and NCRCo stamps. Is this an American item ? And if so ? approximate date .
Thanks a lot …Lottielot

Hi uncle vic. Any ideas on this sterling top beaded purse marked with LL in italics - can`t find the american maker anywhere.Many thanks from Paul. 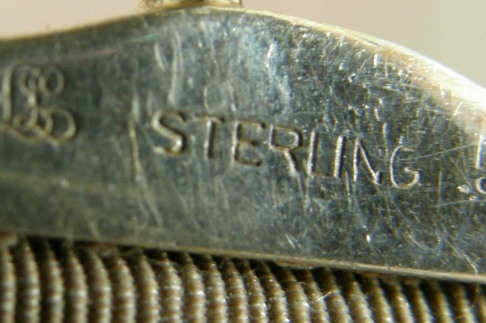 Hi Paul and thanks for joining us. I looked at the purse when you first posted it and can’t find anything on the “LL” with a quick look…I’m terrible at reading that kind of script - are you sure its “LL”? It almost looks like “LB”? In any event I don’t recognize that as an American maker’s mark, but agree it is probably American because of the “sterling” and a pattern number. It is possible of course that the engraving is a custom monogram but I doubt it - it looks like a makers mrak due to the size and location. I’ll do some more research (a/k/a blindly thumbing books).

Perhaps some of our readers have some ideas?

Hi - many thanks for your reply. It`s defnately LL.( although I agree it looks like LB in the picture) Hopefully some info might surface. Paul.

didnt australian silver also use sterling on some occasions?

hi uncle vic,
hope you can assist on this one, i have put many hours research into trying to identify the mark but cannot find even ONE example even if it is a repro then surely there must be an example of this mark somewhere, so i am hoping someone on here has seen this mark before or maybe you know. i posted it under another section and it has had lots of views but no comments. i appreciate any knowledge or direction you may have!
thanks!
MD Skaggs 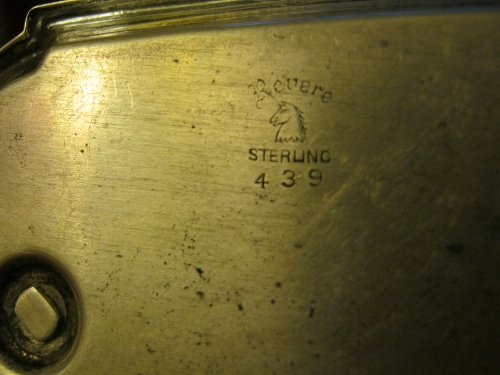 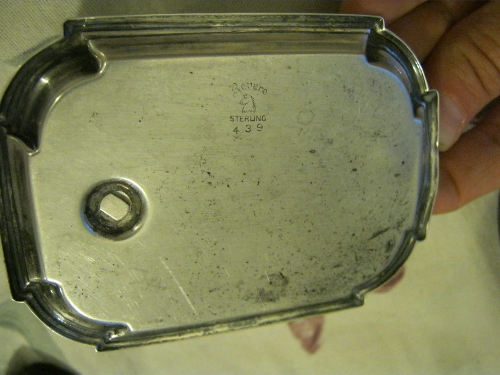 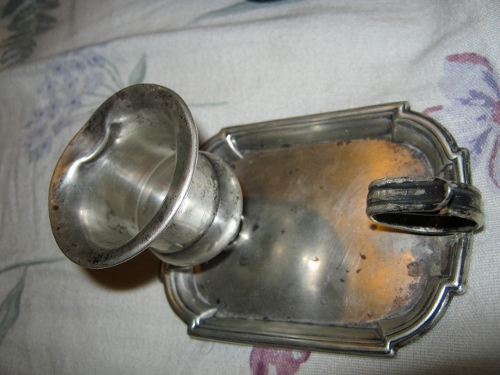 Hi there MD and thanks for joining us. Its the mark of the Revere Silver Co. which became part of the Crown Silver Co. of Brooklyn NY which continued to use it until about 1960.

Thanks Uncle Vic!
I appreciate the information! So I am assuming then this piece then is not a reproduction? Sorry for the questions, it is just that I am not finding any other examples of this mark. Do you know then if this is an old piece or is it new? Would i look then into Revere Silve Co?
thanks so much for the information! Is this a valuable piece?
Best regards,
MD Skaggs

Hi MD - Revere Silver Co. was the successor of Revere Silversmiths, Inc. and as nearly as I can tell your piece would date from between 1914 and 1960 when Crown went out of business. Its value would approximate its silver content value of about 83% by weight of the current quoted silver commodity price.

Thanks again Uncle Vic!
That helps me out alot I appreciate your responses!
Take care!