Hello
I’m new to this site and it appears you guys are good at identification.
Here goes…
Silver coffee pot and has marking as follows;
Crown
Letter A
2lines crossed with 4 dots in corners
357
Eedjw
It has what appears to be bone on the handle
Design has an ornate acorn on the lid
Any help appreciated

It sounds like an electroplater’s mark but I don’t recognise it from your description. Let us see a nice clear picture of the marks and the coffee pot and maybe we can come up with some useful information.

Hello and thank you very much for your reply. I will try upload a photograph this evening. I tried last night to post a picture but this site would not accept it for some reason and after reading the allowed sizes I think the photograph was too big. Please bear with me and I will try my hardest as I really need to know about this coffee pot!
Kind regards and thanks again
claire

photos as requested.
i only have a mobile phone camera, hence the embarrasing photos. They are only photos to give you some idea what the coffee pot looks like.
I look forward to hearing from you!
Claire 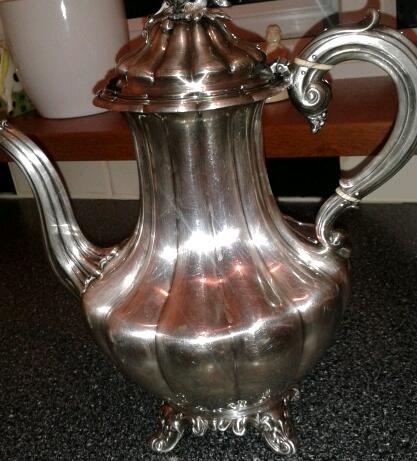 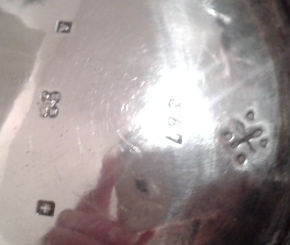 I’m not sure that the cross with dots mark is the significant one. I would be interested to see better pictures of the other marks. From its shape and the letters you describe the EEDJW mark may be the EEBJW mark of Edward Barnard & Sons:

However the crown and “A” are confusing as Barnards were a London company with this mark being registered there only. During the lifetime of this partnership the letter A was not used as a date mark for London, but was the Sheffield date mark for 1844. Sheffield used a crown as its town mark. If this were a silver coffee pot I would also expect to see a lion passant mark indicating the sterling standard.

hello, more photos
any information greatly appreciated.
there is one more marking that I just cannot get a photograph of…
the only way i am able to describe it, is that it is in the shape of a daisy (flower)
there is something in the shape but until I get a magnifying glass I cant provide any information.
Ive also just noticed that what I thought a crown, is in fact a shield (or looks like it anyway) 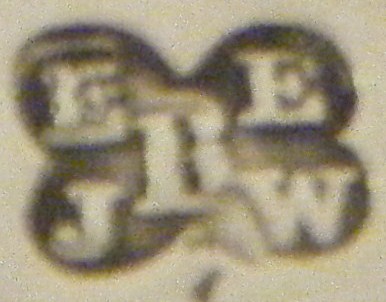 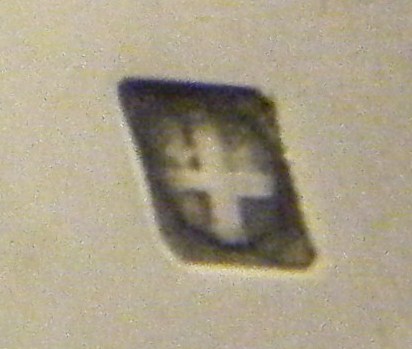 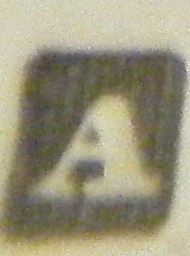 The maker’s / sponsor’s mark is definitely that of Edward Barnard & Sons and was used on silver assayed in London from 1829 until 1846. However, after some further research, I believe that your coffee pot is silver plate, perhaps what is called Old Sheffield Plate (OSP) rather than electroplate. Barnards used a shield-with-cross trademark (derived from the arms of the city of London) on their silver plate and I suspect that the A may be some sort of date coding but I don’t think that there is any record of these marks.

OSP is produced by fusing a silver sheet onto a copper base and therefore contains substantially more silver than electroplate which comprises an extremely thin layer of pure silver deposited onto a base metal by an electrochemical process. If your coffee pot is OSP you may be able to detect the 2 layers by looking closely at its edges, on the lid for example.

You may also find the comments on this post on another forum interesting.

hello
Many thanks for that interesting information. I do belive your right with regard to the silver plating as I have looked on the lid and it really does look like what you have explained.
Do you think the pot is worth anything? If so, how much?
I am looking to sell it even though its a beautiful piece, it just doesnt fit in my decor at home.
You really have been helpfull!

Yes, it is worth something. OSP is much more desirable than electroplate. However I have to say that I really have no idea how much. If you can find a local auction house it might be worth getting an estimate.

I note that you have put this on the well-known online auction site. I will watch with interest. Good luck.

Just a couple of points: I said that the A may represent a date. A picture of the layering which you think you can see would be useful for people to decide whether it is OSP or not.