Good day once again. Please would you be so kind as to help me ID this particular apostle. I have recognized a few through their different attributes, but I do not know what this object is that the apostle is holding. Who would this one be?
The sterling silver salt spoon was made in 1872 by the well-known smith George Unite, Birmingham. As salt spoons go, it is only 8.2 cm long. The bowl had a ugly blotch near the hallmarks, but I have managed to clean that up.
Regards. Jan. 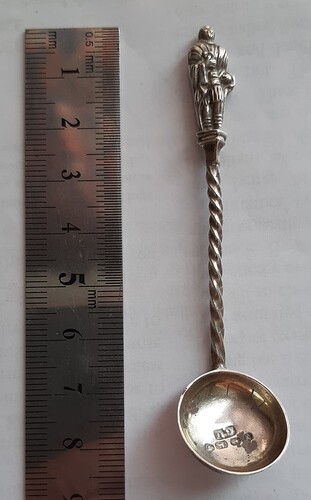 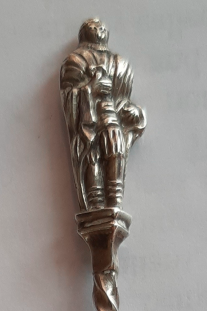 He may not be an apostle. I note that he is wearing trousers rather than the traditional robe so is perhaps a historical figure?

Phil, thank you; yes indeed one must be careful to assume things easily. What you noted as the attire looking like trousers seems valid. Well, following on your post I went “apostle hunting”, after drawing a blank with knights and historical figures. Seems George Unity was definitively not alone in the making of apostle salt spoons. Harry Atkin and Roberts & Belk also made them, but the list could be much longer. But here’s the problem: Apostles as spoon finials are recognized by their attributes, and not one of the published attributes show a book-in-hand. Please look at the pic which I attach, showing four apostle spoons in an advertisement. The one on the far right, by George Unite, is exactly like the one I have. All four figures are alike, they are all given as apostles, and they all are seen holding a book.
What I think is, that the spoons shown are typical of single spoons which are not part of a set. In this case the apostle is simply holding what appears to be a book and is therefore (how shall I say) unidentifiable?
Regards. Jan. 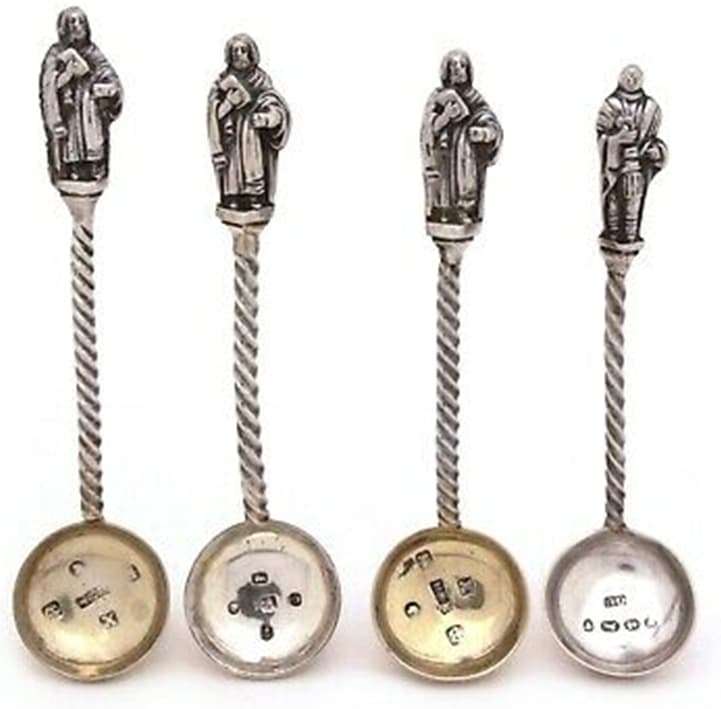 Here’s a list of the 12 apostles with their 12 different attributes (things with which they are associated). I cannot tell from the photo which one you have. If I had to guess I would opt for Phillip with a basket of loaves and a Tau Cross. It also seems to me if you are a fisherman leggings rather than robes might work better in a boat full of slimy fish and water

Guildhall, thank you for your kind contribution. Yes, those leggings are what’s making us all wonder! You’ll notice all the spoon finials in the pic above show an apostle holding a book. I’m still thinking that’s a “nameless” apostle, an image used by the spoonmaker when he does not wish to specify an apostle by name or attribute. The earlier big question was if these are apostles or knights. I think that has been answered.
Have I not been searching hard enough, or has there been no-one who has collected all 12 apostles and photographed them?
Regards
Jan.

There are plenty of online pictures of a sets of 12 or thirteen if you have one with Jesus Christ included. The more interesting question to me is what was the source of the spoon-end images in the first place? Those images, likely from plate glass in church or cathedral or illustrated books would accurately depict variants in vestment and items being held. Remember in pre-literate days, when the majority of church goers couldn’t read and if they could it was still in Latin, they looked images for interpretation not text.

The earliest apostle spoon extant I can find go back to Henry VIII but I suspect that is a function of older silver having been melted down to pay soldiers in the Wars of the Roses rather than the inventiveness of image creators in his time.

Since all “attributes” refer to the occupation or predilections of the saints, it is reasonable to suppose their vestments followed suit. Scholars might wander around in flowing robes, in your country they still do in the streets of Oxford, but fishermen would drive their wives insane with the washing up demands for fishy robes after a day at the oars or in the sluices.

You have given us much to think about, CRWW. I for one will look deeper into this matter. Hope I’ll find something of value!
Regards
Jan