Please can anyone help me find out what what this HallMark means in this teapot?
I will be very appreciated to any thoughts and ideas. 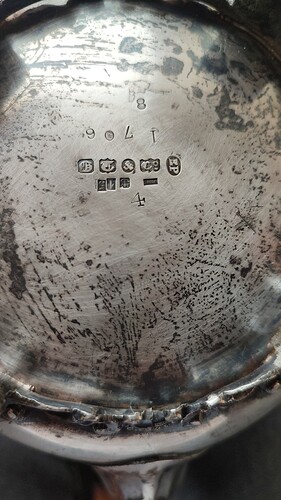 The marks tell us that your teapot is not silver but electroplate (EP) and that it was made by the Sheffield company George Travis & Co - the gothic lettering reads GT&Co.

AF and anchor is a French electroplate mark of Albert Frionnet of Paris who most likely imported it into France. The 15 mark shows how many grams of silver were used in the plating process; this was used in France to show plating quality.

Thank you for your respond, I really appreciate.
Do you know what year was made?

Wow, you are absolutely amazing person
Thank you so much for your help, time and effort.