Hi,
First post for me. I believe that this mark is for 1624 (Charles I ) and if so does it have any value other than scrap due to 2 splits on bowl 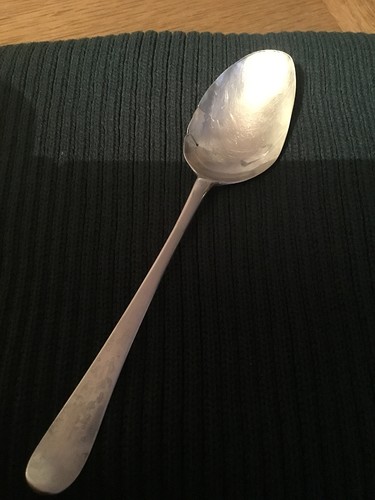 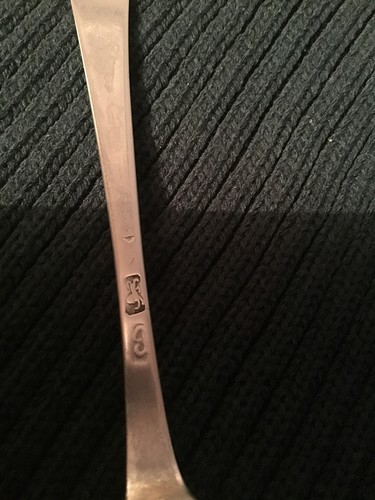 Style-wise that is definitely not from 1624, and the lion passant is wrong for that date too. The spoon appears to be Hanoverian pattern, so dating from around 1720 onwards. I can’t match that partial date letter, assuming it is a date letter and not part of a maker’s mark, to anything in any of the English assay offices.

Value? I have absolutely no idea.

Thanks for that Phil. Didn’t think to check lion passant. Wishing you a very Happy Christmas

Goodwin’s mark appears at p 178 of Jacksons’ as well.

On the spoon, the pointelle and the G have been compressed and then worn off.

The ghost outline for the date letter which should likely be 1721-2, a Capital F in a Shield. This based on what is most likely rather than what is certain.

As to value. It has zero value as a usable spoon. It has a scrap weight value of whatever the weight is X.925 and it has a curiosity value of probably about the same. Phil shows the mark appearing on bowl, cup, castor, and porringer and Jacksons on a dredger. This means Goodwin was generally a hollow ware manufacturer, not a spoon maker. This, in turn, decreases the likelihood of him having made it but does not eliminate it.

We do know it was made in or after 1720 because the lion appears, having been suspended for a higher standard to defeat coin clipping prior to that.