Need some help with this mark. It’s on a large holloware piece with a 1850’s engraving. Someone said it was AG Schultz - but that doesn’t make sense because they are not listed as having been in business until 1890’s. Any clues as to name & city of manufacture? 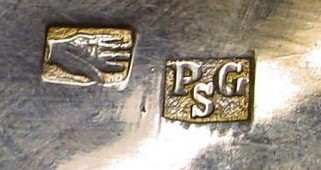 Hi there and thanks for joining us. I was hoping one of our readers might chime in on this. The “hand” mark you show is one of the Schultz marks, but I’ve never seen the letters as you show in connection with the hand. I have seen “hand” marks on other silver, indicating that the item is “hand made”. You mention that your item is “coin” silver…is there a mark such as “9” or “90” indicating that?

No - no other marks

How do we explain Kovels sez a schultz was not in biz until 1890
But the engraved inscription sez the bowl was gifted 1851?

I can only offer a few ideas…also known to some as rank speculation: It was made by some prior Schultz relative who used the hand mark which was picked up and later used by the AG Schultz Co.? Or another possibility is that it is late 19th century Schultz and the inscription was “pre-dated”…I’ve seen the reverse many times, where a very old silver piece was engraved with modern dates, often for a silver anniversary gift.

The letters are not consistent with the Schultz makers mark of the hand (Schultz used the hand facing either direction, BTW) and could be the initials of a retailer.

What is the inscription?