Does anyone ever heard of DREW & co. london is it silver

This dish is really heavy and has this punched on the bottom" DREW & Co, LEADENHALL ST, LONDON, 4774" down bellow that is the # RD473108. I have no idea about silver but it does not have any hallmarks on it. But when you take the handle off there is “H.S” punched in it. Aswell as the # 1 or small L and another 1 or small L on an angle beside it. punched in the bottom middle of handle. all i’m trying to find out is, what it could be made of and how old it could be? There is nothing on drew &co. on internet but do find items under Drew and sons??? Thanks for looking and any info would help. Thanks jordan 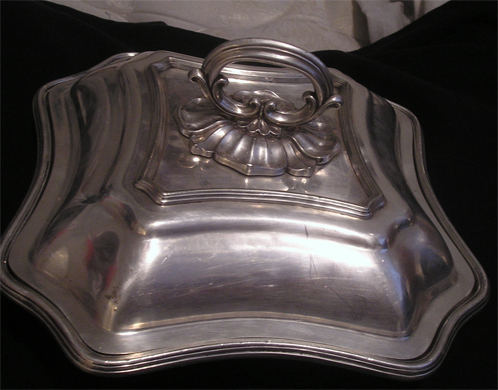 Hi there.
After doing some research on this i’m still struggling to find anything out for you. Drew and Sons were listed as H. B. Drew & Co in 1900, but they were listed as being at 42 Kings Road, there doesn’t seem to be any mention of Leadenhall Street.

All I can suggest is that it could have been a shop mark rather than a makers mark.

The entree dish is silverplated, and would have come from a set of four, or possibly from a pair. The number 1 you see is so the pieces weren’t accidentally put onto the wrong dish.

Drew & Sons was the parent company, based at Piccadilly Circus from 1887 until 1914 when they moved to premises in Regent Street. They also had premises at Leadenhall Street in London from 1888-1914 and also at Kings Road in Brighton from 1894.

Their pieces are usually stamped ‘Drew & Sons Piccadilly Circus’ so yours is more unusual.

I hope that helps.

I have a red leather clutch purse marked inside in golden stamped lettering:
DREW & SONS LTD PICCADILLY CIRCUS W.1. MADE IN ENGLAND
It has a “silver” metal clasp and a metal monogram that looks like IL within a circle.

Can anybody enlighten me further? I have been looking for info on this object, which belonged to my late mother, for about a year now, and these posts are the closest I have come. However this obviously isn’t silverware - sorry about posting to this forum if you object… but any info or pointer will be gratefully received!

i can upload and image if it helps…

Samuel Summers Drew founded his firm around 1844. The company was better known for their bags, cases, trunks and other leather goods.

First entered a silver mark January 27, 1887 in London. In 1900 Samuel Summers Drew and Ernest Drew ( I think one of his sons ) were listed as gold and silver workers. Located at 33 Piccadilly Circus, London, W and 156 Leadenhall Street, London, EC.
Listed as Drew & Sons in 1903.

Samuel Summers Drew either retired or died by January 15, 1914. This is when Ernest and John Summers Drew entered their own mark without him.

It was John Drew who founded the company in 1844: Samuel Summers Drew and Ernest Drew were his sons. The early company literature gives the name as ‘J Drew and Sons’.

Does any one remember a store on North Audley Street, Mayfair it was a jewellery store witch said incorporating Drew & sons and closed in the last 5 years.

I interesting to know what store it was on North Audley Street.

I found out there last mention was a store on mount street in Mayfair! Not as my last post.

Does any one remember it at 91 mount street, london?

I believe the store was on Mount street in London around 1971! Does any one remember this store ?

I just bought this at an antique store in Vancouver, Washington. 16 oz flask. Assuming it’s sterling then? 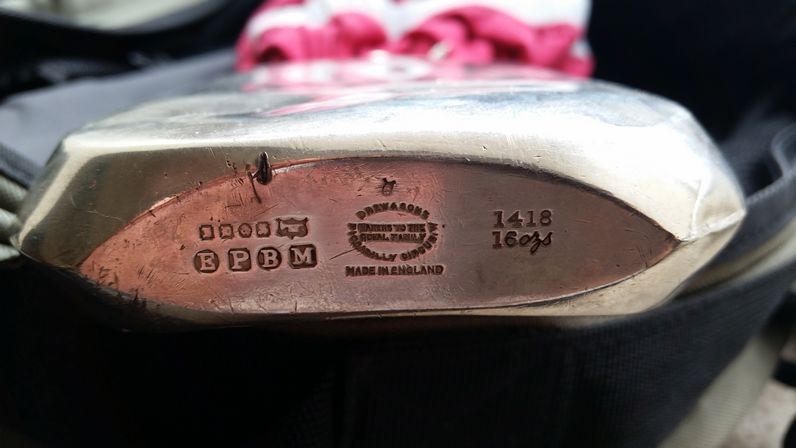 No, it’s electroplate; EPBM stands for ElectroPlated Britannia Metal. The manufacturer is James Dixon & Sons of Sheffield. Drew & Sons were the retailers.