Does anyone know about the Caravelle/Hoka company?

I recently bought a silverplated bowl and pierced basket with enameling from an online auction that said it was made by the Caravelle company in West Germany (so obviously post-war). I looked online to try to get info about this company, but could find very little, other than the name Hoka also being connected with it. I was just wondering if anyone out there knew anything else about this company. I haven’t received the items yet, so don’t have a pic of the bottom (though the auction says they are ‘unsigned’ and other internet items only showed a sticker for a similar bowl.) I don’t imagine they are worth much, but am just a sucker for enameling (and blue.)
Thanks! 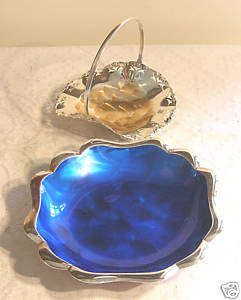