I found this item in a flee market in Sweden. As I am living in Sweden I first thougth it to be made here. But I soon understood that it was from a different country, and soon also England. After spending nummerous hours on the internet this information revelaed itself; It is sterling silver, London and hallmark of William Hutton & Sons Ltd. But I am oblivient to the use and the age. I simply dont understand how the letters works in GB.
Sweden have a simple system,You can find it here; sophiessilver.se/stamplar.htm
Scroll down little, A=1759, E=1763, A4=1831, N4=1843 and so on. I thougt that the letter “F” ment 1764 on my item, and if it was swedish it would. Can anybody help me?
// £eonard 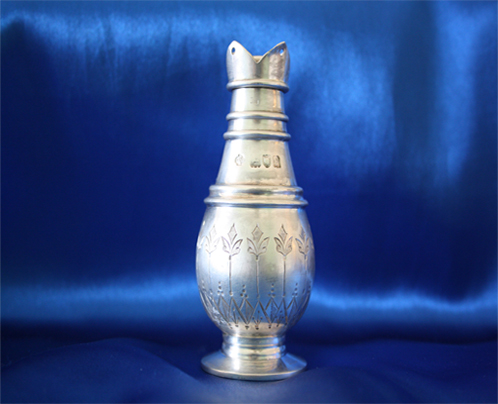 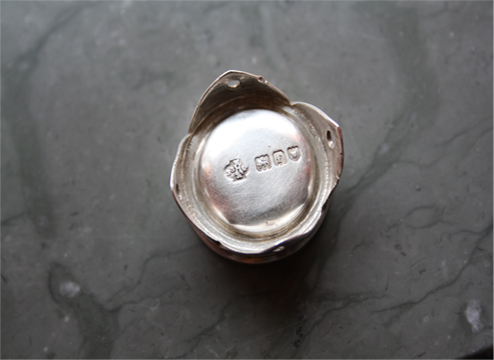 Hi Leonard and welcome to the forum. You have done well to identify the maker as Hutton’s mark is not easy to interpret.

As in Sweden our British hallmarking system has a date code for every year. However it is a little complicated as each assay office (up to 1975) had its own date lettering system. As only one date letter is used the cycle repeats regularly. So your piece has a London hallmark (uncrowned leopard’s head indicates London) with an f for 1901. But 1921 also has an f, 1941 has F, 1961 has f - the shape of the punch and the style of the letter allows us to distinguish between the years. There is a guide to British hallmarking showing the Assay Office marks and some date letters at 925-1000.com/british_marks.html.

I have no idea what it is for, although I suspect it might be incomplete as there seem to be mounting holes for something on the top. Also I would not expect the hallmark to be on top like that.

Thank You, Moderator!
That information was most helpful. I found the year-list for London and I now know that my bottle was made 1901. The reason for the hallmark on the top is because it contain two part. The top - it looks like a crown - is actually a lid that one can screw of. It is a bottle. And I don´t think sometning´s missing. The lid - I belive - is made to resemble a crown, hence the hole.
Under the bottle fot there is more hallmarks in shape of a feather and “1”. What does that signify?