I am interested in knowing more about a goblet that I have aquired. It is plain with an S monogram on the base.It stands approximately 4’ tall. It is marked on the bottom with a w and what appears to be either a 2 headed full bodied lion or a full bodeied lion with 925 over the top. It states sterling 1668.I was told it has a gold wash over it. Any information would be greatly appreciated. Thanks in advance!

Hi and thanks for joining us. Probably the American maker Whiting, but to be sure please post a clear close up photo of the mark.

Gold washing is a process of electroplating a very thin layer of gold over the silver, typically on the inside of a vessel such as a goblet or cup. It wears off quite easily.

I have uploaded photos of the goblet and the markings on the bottom. I tried to get a good shot but wasnt very successful. On the top is a w,beside that is the lion,below that is sterling then under that is 1668. Thank you. 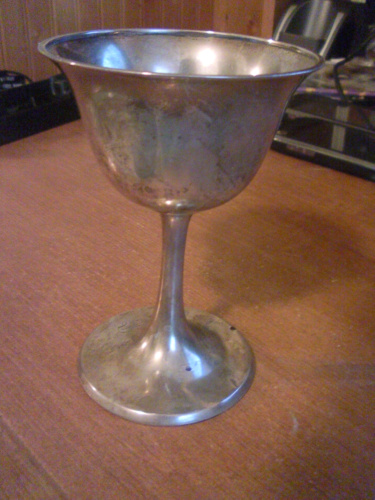 Thanks…see if your camera has a “macro” setting where you can get a clearer photo of the marks. The shape and placement still looks like Whiting. Is the lion facing left and have a “curly” tail?

It was set at Macro as on. Yes the lion is facing left and has a curly tail. Can you tell me if it has any value? Thank you.

Can you tell me about what year this was made if the 1668 is not the year and if it has any value? Thank you.

That confirms it was made by the Whiting Mfg. Co. of Providence, R.I. Whiting was one of the few American companies that used date marks on much of its silver, beginning in 1905 and continuing through 1924. Whiting’s date marks are geometric shapes and one needs a chart to read them.

The number on your goblet is the pattern number and has no relation to the date the goblet was made. Whiting was in business under that name from about 1866 until it was acquired by Gorham in 1926. Most of the silver bearing the mark you describe was made in the late 19th and early 20th century, although Gorham continued to use that mark after it acquired the company.

American sterling silver goblets in plain patterns are selling, in good condition, for about $100 to $200, with a small one like yours on the low end of that. I use the Gorham pattern #272, which is a wine/water goblet that is 6 and 7/8th inches tall, as the standard for plain American sterling goblets and a good one is worth about $150-175. You may check Whiting goblets on www.replacements.com for a high retail value and the “completed items” on eBay for a real world value.

Wow! You have answered my questions and I am thrilled that you are so knowledgeable! I looked a little closer at the goblet and noticed that there is a geometric shpe on the bottom as well. It is of a backward L. So I looked up the chart and it states the date of this shape is 1922. I love this site and plan to visit often! Thank you so much for your time!