Hello and thank you for letting me join. I was trying to identify this hallmark and I am having no luck. 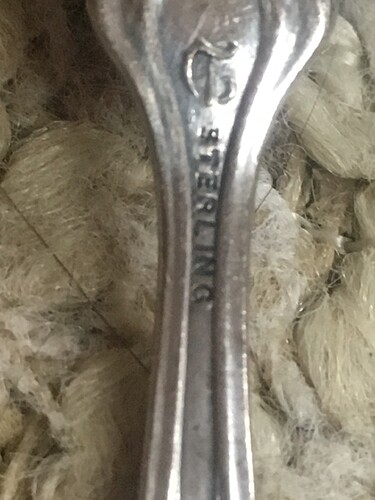 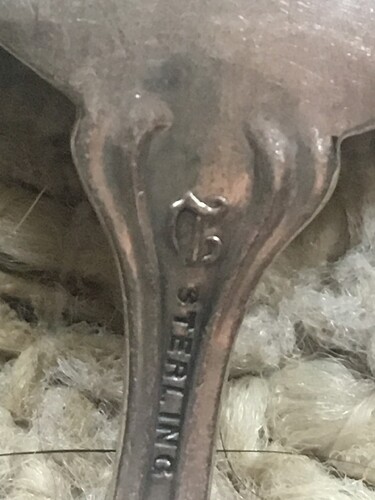 I have six spoon and forks with this mark. Any help would be appreciated. Thank you.

The script D (upside down in your picture) is the mark of Wm B Durgin Co. See here. Note that this is a manufacturer’s mark, not a hallmark.

This link will tell you all you could possibly want to know about Durgin silver and perhaps a great deal more. The massive factory became a life insurance company and then a law school. A logical sort of projection for 20th century real estate in the northeast. 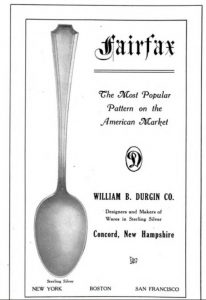 William B. Durgin’s silver flatware and serving pieces are today still very much collectible and in demand. During the company’s heyday his Fairfax silver pattern was the leading one in…

Here’s a link to allow you to build up your Durgin spoon collection.

And, in case you missed it here are some Durgin spoons that ebay sellers would like to you know about.

Probably the most well known item of silver ever made by Durgin was the Davis Cup — the premier silver trophy for mens’ tennis first awarded in 1900.

The Davis Cup is the premier international team event in men's tennis. It is run by the International Tennis Federation (ITF) and is contested annually between teams from competing countries in a knock-out format. It is described by the organisers as the "World Cup of Tennis", and the winners are referred to as the World Champion team. The competition began in 1900 as a challenge between Great Britain and the United States. By 2016, 135 nations entered teams into the competition. The most succes...

Why was it built in the US rather than by a London maker? Probably, since the whole point of the trophy was to encourage then neophyte American players to challenge the Brits, to encourage them not to lose a trophy made in their country to the Europeans.

Rather the opposite of the fate of the Americas Cup, made by Garrards in 1850 for the RYS for a speed trial around the Isle of Wright, won immediately by the Americans snd largely held by then ever since.

Canadians challenged the title twice once with the RCYC and later by the Bay of Quite Club. Lack of funds and access difficulties weren’t seen as enough to discourage Canadian sailors so the Yanks changed the rules and said fresh water club vessels were excluded. The UK agreed.