I have no idea where my silver cigarette case is from.

I think its from egypt. It has some marks in the corner on only one side that says 437 in egyption. If you can tell me about how old this is or anything else about this i would greatly appreciate it. 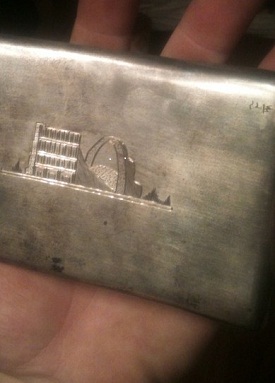 In cas egypt it should have halmarks - if not then it is not silver.

In the modern world, in an attempt at standardizing the legislation on the inspection of precious metals and to facilitate international trade, in 1973 a core group of European nations signed the Vienna Convention on the control of the fineness and the hallmarking of precious metal objects. I appreciate the response. But I dont like the words or the way you formed them. Im not ignorant. The (new=less than 50) coment not appreciated. I have had it looked at by a few expert jewlers and a antique dealer. They all confirm it is solid SILVER. 163 grams. And they all also agree that it has more value than MELT. Further more, Now the questions I have are: Who the engraver was? How do i find out? And what does the (437) in the corner of it mean that is writen in egyption? I realize there was halmarking done before 1973, but it was not standard law before then. And mabe the 437 has somthing to do with that. I think it says 437, but i dont read hyroglyphics. Im just making an educated guess.

From 1 September, 1916, the hallmarking system established by the law of 8 August, 1906, carne into force. Items produced in Egypt were stamped with three marks:
Im so lost on how to figure this peice out, especialy since it has been confirmed to be real silver.

Your cigarette case is from Iraq. The image is of the Ruins of Ctesiphon. “437” in Arabic (not Egyptian - note correct capitalisation and spelling) is ٤٣٧. I can’t tell from your image if those are the characters on your case. You should also remember that Arabic is written from right to left. I think it more likely that it is the mark/name of the maker.

Iraqi silver is rarely hallmarked and as your cigarette case does not seem to have any other identifying marks it will probably be impossible to date it accurately. I would extend my colleague Hose_dk’s dates a bit and suggest up to 80 years old on the basis that there was a Britsh occupation in Iraq and British servicemen may well have made a good market for the local silversmiths.

ccould be. I see a building looking quiet modern. But I have no idea of how old, just that it is newer.

Thank you so much. Any ideas on where or who i could take it too? What kind of place in northwest Florida could i find to give me some value estiment. Im going to try to post a photo of the other side of this thing as well.