It pays to do your Homework 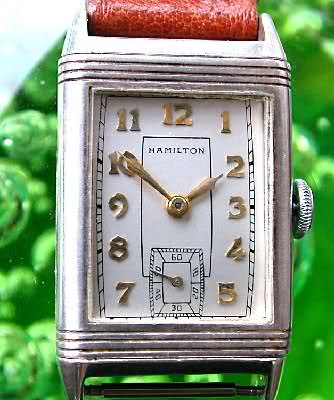 This Wristwatch recently came up on eBay it enraged the Watch community
as it was a Faked Watch.
I thought I would bring this to members here to be aware of any more that
may be listed on eBay or elsewhere.
This one was billed as :
HAMILTON Otis~Sterling SILVER “Reverso” vintg. w.w~1939
there was 14 bidders for it and it finally went for US $1,137.00 or nearly £800

Some members here may recognise the case on this as being very similar to a
Jaeger Lecoultre “Reverso” the history of the reverso goes back to 1930 as
Jaeger Lecoultre bought the patent in 1931, The American Hamilton Watch Company
were also interested in the Reverso patent, Unbeknown to Hamilton which were in
talks to acquire the patent Jaeger Lecoultre beat Hamilton in finally purchasing
the patent, But this was not before Hamilton had started to produce the Hamilton
“Otis” model which used the Reverso patent , I am not sure how many “Otis” models
were produced , before Jaeger Lecoultre started a long drawn out Patent infringement
suite against Hamilton , Top and Bottom was Jaeger Lecoultre held the patent and
Hamilton had to cease their production of the “Otis”, As I said only a few Hamilton
“Otis” were made and as such are a very rare Wristwatch.
I was immediately suspicious of this listing as I looked at the Hallmarking on this
Watch it struck me as odd,
The case has got an English assay import mark “reversed omega” for a London import
and a date hallmark for 1920 as near as I can make out ???
Can members here varify that above date. but no import sponsors mark
Then again why should an American made watch with Hamilton Stamped on it, have to
go through the English Hallmarking system at all
Also If I am right in the Date mark on this watch the Datemark predates the Patent
by 10 years.

Hope this helps other members

The date is 1918. I’m not sure that the lack of sponsor’s mark is significant as the case is very clearly stamped “Hamilton”. Do you think that the case and hallmarking are genuine with a falsified watch inserted, or is it just that it is incorrectly described? The hallmarking looks genuine to me.

As always on eBay “caveat emptor”.

I’m not sure that the lack of sponsor’s mark is significant as the case is very clearly stamped
“Hamilton”.

Yet why hallmark it through the English system ??? It shoud have been sent straight to America
with Swiss hallmarks.

Do you think that the case and hallmarking are genuine with a falsified watch inserted, or is
it just that it is incorrectly described?

The Hamiltons used a Calibre:980 movement in the “Otis” Which this has but the case is the suspect part
and the use of the “Swiss Made” stamp at this time, Hamilton never imported Swiss movements til 1960
Also whoever is Faking these is using the same Fake Hallmarkings and serial numbers to the back of the case
Again if you look closely at the Dial on this watch it is from a slightly barrelled case not a square dial
as it should have.

yes, there are doubts here… But one thing i can tell you is, what a lovely fake lol. These hallmarks are real however… The material looks silver from first glance til a long stare. Its a nice peice, and remember, high quality fakes become valuable too after time!!

I agree with you there, But a fake is still a fake
These fakers usually slip up over very little cosmetic atributes ,
I wonder how many were made with case serial 091919