John Cockburn, Goldsmith & Jeweller - who was he?

I inherited silver which includes a piece in a leather box with an interior stamp on the silk linking that reads: John Cockburn, Goldsmith & Jeweller, 28 George Street, Richmond. Does anyone have any idea of who this maker is and the value of such a piece? The handle appears to be some type of bone.

I did Google searches and couldn’t find any information at all on this maker. Any info will be greatly appreciated! 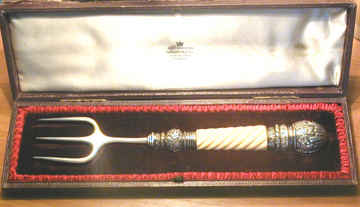 I came across this site whilst looking for details of an ancestor of mine. John Cockburn was the son of James Robinson Cockburn the brother of my great great Grandfather. Joseph Andrew Cockburn. Their father was Andrew Cockburn a silversmith who was born in 1760 in Edinburgh. I have the family bible giving me all this information. So I believe that John Cockburn was my great great Uncle. I have yet to find out why their father Andrew came down from Edinburgh and married (Susannah Knights in 1794 - when he was 34). As it is my 60th birthday this year - I intend to go to Edinburgh to find out what I can about the mystery.

What I can tell you is that Joseph Andrew (James’ brother) was a watchmaker, so obviously this is in keeping with the family history of working in the jewellery trade somewhat. Andrew Cockburn’s father was also called Andrew and he was born in 1735 and listed as a tinman and copperman. Hope this information is useful to you. Please reply as I am very intrigued about my whole family. so much so that when I married for a second time I reverted to my maiden name by Deed Poll as my father was the only one to have children and he had all girls.

I know none of this has anything to do with the item you are asking about, but at least it gives you a little bit of his history.

Thanks for the very interesting history - I enjoyed reading about your family and I am going to print out your reply and keep it with my piece. While I did inherit this piece, I am in no way related to your family. Your surname was simply the maker. This was a piece passed down to me from family and I have no history on it, other than that it came from a great-grandmother. Sorry I can’t be more helpful and the best of luck in your search. I too am an amateur genealogist!

I inherited silver which includes a piece in a leather box with an interior stamp on the silk linking that reads: John Cockburn, Goldsmith & Jeweller, 28 George Street, Richmond. Does anyone have any idea of who this maker is and the value of such a piece?

Hi Barbara, I came across your old post while googling, and this is of interest to me, and maybe you, since John Cockburn was my great-grandfather!

I note the reply you’ve already received from Dawn Cockburn; like her I’m interested in genealogy and in fact she and I have already ‘met’ online some time ago and been in correspondence about our mutual ancestry (we’ve worked out we are distant cousins).

So… John Cockburn: he was born in 1872 and died in 1950, some time before I was born so I can’t tell you an awful lot about him other than what I remember my grandmother telling me as a child. He had two daughters, one of whom was my grandmother. He was a well-known jeweller in Richmond; he certainly wasn’t a big manufacturer. I have a rather nice clock which has ‘Cockburns of Richmond’ on the face, and I always thought that clocks were his speciality - maybe not though?

As far as I know, the business folded when he retired, but can’t be sure. It’s nice to have the exact address of his business - I didn’t know it before! I see it’s now a mobile phone shop: http://www.allinlondon.co.uk/directory/1235/60432.php

Hope this is of some interest.
Regards
David

Thanks for taking the time to respond to my post and I absolutely DO find the information you provide most interesting - particularly that John Cockburn was not a large manufacturer. I suspected as much simply because the quality of this piece is exquisite and doesn’t look like something mass produced. I am taking your comments, along with Dawn’s, and printing out the information to keep in the box which houses the piece.

It’s amazing how connected we all are in some way or another, and the internet makes it all possible (or at least so much easier!).

Have a nice holiday weekend and, again, thanks for taking the time to reply.

Another John Cockburn here, and i was wondering if you would be interested in selling the item you have? I collect historical items with a connection to the wider “Cockburn” family and already have 2 silver plate peices from John Cockburn of Richmond.

Many thanks & regards, John

Because this piece was passed down to me by family through several generations, I plan to pass it along to my son at some point. It has meaning to us (even though we’re not related to John Cockburn) because it belonged to my son’s great-great grandmother. Thanks for the offer though.

Hallo to Barbara Maine Dawn Cockburn and John Cockburn.I am the closest member of this part of the Cockburn Clan to take part in this series of E-mails.J.C. OF 28 George St was my Grandfather.My mother Doreen was his elder daughter while David who is in on the E-mails is the Grandson of his younger daughter Marjorie. I would like to hear from any of you as I could probably fill in a few spaces.

I have an oversized pocket watch on the dial it has John Cockburn George Street richmond S.W its in a leater case with a dark green velvet interior and works excellent. Its very old. It has 7 or 8 watch maker inscriptions on the two rear covers. I am interested in selling it i can be reached by email @hardhitter2005@gmail.com or by phone (501)326-7863 @ anytime.

Hi
I see from past comments that John Cockburn is interested in other pieces.I have a Muffin dish or egg warmer.Anybody interested?
If so please give me your email address and I will email details plus photos. My email is brianandterry@hotmail.co.uk
Regards
Brian
Ps its silver plated

Here is a piece of jewelry by John Cockburn, with a lock of Napoleon’s hair, I recently noted at the British Museum 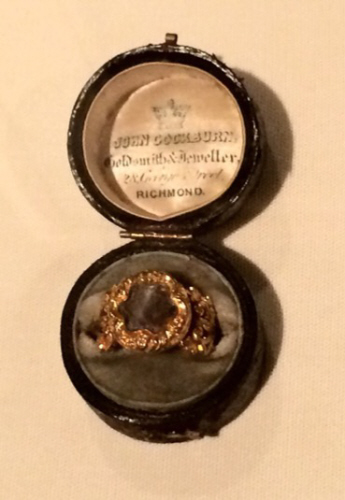