Hi, I need help identifying a silver mark on an item dated 1687, after some weeks I still have found nothing sorry the marks aren’t all clear 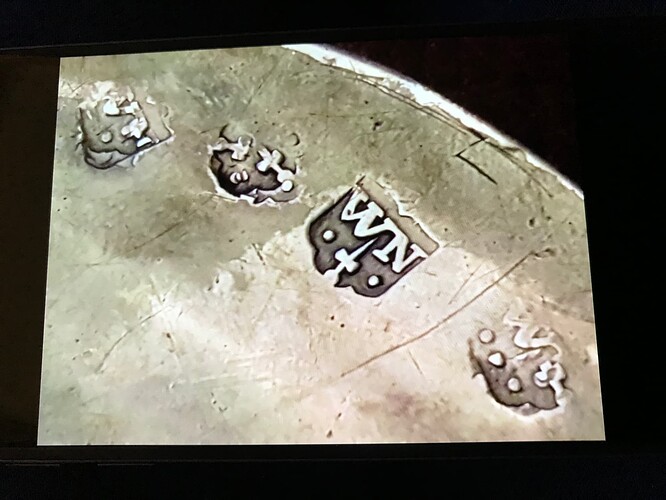 This mark corresponds to an unidentified mark illustrated by Jackson (Jackson’s Silver and Gold Marks of England, Scotland and Ireland) and noted as having been seen on a “small plain tumbler” dated 1678.

Thanks for the reference, the piece has two dates engraved 1555 & 1687 so probably made 1687 rather than the second date being added. I will order a copy of Jackson’s A.S.A.P. It’s a nice plaque with connections to Archbishop Holgate ( hence the first date) thanks again for the quick response Phil

Any other info appreciated, it would be great to find out if it’s Scottish, Irish or English?

Sorry, I should have said that it’s a London mark.

Is silver from this date relatively rare? It’s a plaque stating that something was a gift from archbishop Holgate I assume screwed to a box of some kind. Impossible to find out what now.

Silver from the 17th century is certainly rare. I guess as the mark is on a plaque it might not be heavy enough to be required to be hallmarked.

73g not sure if I’m allowed to post a second image? Mike

There is no limit to the number of pictures you can post.

73g is well above the limit so possibly as this was part of a presentation and was probably not intended for sale they decided not hallmark it. Or maybe they did things differently back then…

Phil can you believe it a video has appeared on YouTube about the very item I have from a guy called Tvpresenter4history, from what he says the plaque comes from a Almshouses in Hemsworth, stitched to the residence sleeves, so the marks may originate from York area

Could you post a picture f the entire badge? I have seen almshouse clocks and badges from the 18th century — indeed there is one posted by Peter Cameron currently, but this early would be of great interest. 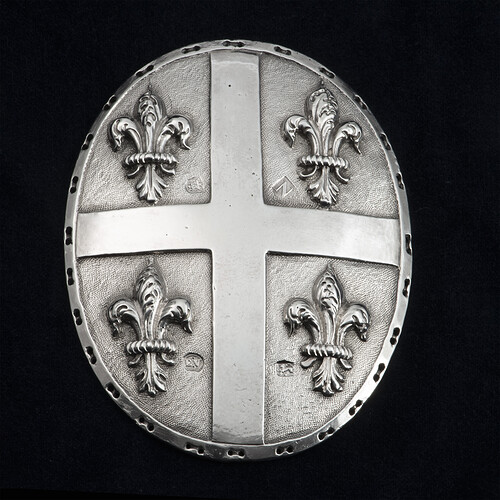 A George II silver Alms Badge for the Joseph Banks Almshouses at Revesby...

Alms houses were quite different from the workhouses. The latter were virtually prisons. The former were places particular classes of parishioners might seek refuge as they grew older and unable to work.

Silver in the late 17th century was much in demand and 73 grams of it would have bought a 4 lb loaf of bread a week for just under four years.

Alms house inmates or bedes were supplied with a cloak on which this badge would have been sewn or otherwise attached. The stipulation was they wore it to go to church to pray for the soul of their benefactor.

Bishop Holgate who founded it was a crony of Thomas Cromwell, a man mostly remembered for the destruction of the abbeys and churches associated with catholicism.

One can speculate this institution’s survival of Henry VIII rapacious greed had much to do with that association.

The best known remaining alms house is the Chelsea Pensioners home founded by Charles II for veterans of his father’s army.

This is likely where you might find who the silversmith was:

A Touch-Stone for Gold and Silver Wares, or A Manual for Goldsmiths, and All...

AbeBooks.com: A Touch-Stone for Gold and Silver Wares, or A Manual for Goldsmiths, and All Other Persons, Whether Buyers, Sellers, or Wearers of Any Manner of Goldsmiths Work: Discovering the Rules Belonging to That Mystery, and the Way and Means to...

Jacksons Silver and Gold Marks p.32. suggests it is the only source and that since it survived the Great Fire of London was probably deliberately destroyed later.

He was admitted to the Worshipful Company of Goldsmiths of London in September 1668, and was also a member of the Longbow String Makers’ Company of London.

The rather important book first published in 1677, was enlarged in 1679 as “A New Touch-stone for Gold and Silver Wares”. In the second edition, Badcock drew attention to the many fraudulent practices current in the trade at this period.

Sorry for delay had trouble logging in, photo of full plaque 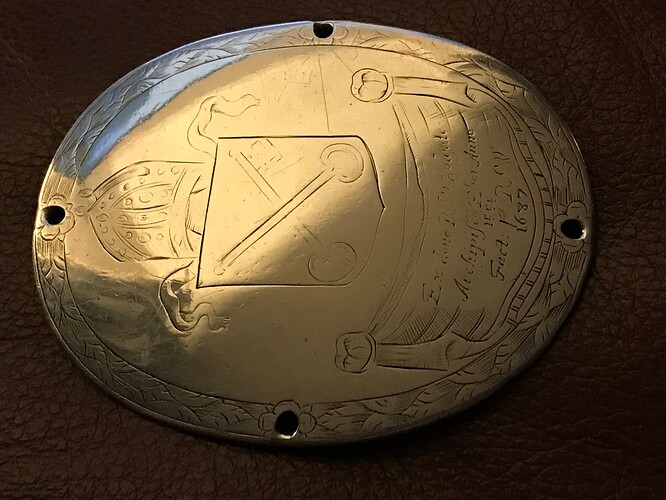 I know mine is earlier but it’s far more basic than that posted by Peter Cameron, carries quite a price tag !

THa k you for posting the front of the badge.

It does indeed say it is the gift of Archbishop Robert Holgate in 1555 (Ex Dono…) which was the year of this death. Actually he was only Archbishop until 1554. He died a year after he retired.

“Fact I RW 1687” will refer to for whom the badge was made (factum) his initials RW and the year 1687. I do not know what the I with the fish (Christian?) symbol following it means.

The records of the house will show you who RW was.

The records of the house will be able to show you who RW was, I expect.

As to value, yes I noticed the dealer’s price which reflects rarity rather than intrinsic value.

Yours which is some 100 years older is likely even more rare. On the other hand when you get to the Alms house you may find they have boxes of them stashed away!

I should have mentioned the mitre and cross keys on the badge are a not so subtle reference to the Vatican:

The coats of arms of the Holy See and Vatican City combines two crossed keys and a tiara.

The Archbishop’s private badge featured twin bulls, not the cross keys of the Holy See.

A dangerous game for the Bedes to be playing in James II’s England in 1687.

The following year James II, brother of Charles II, an avowed Papist determined to reinstate the Roman Church in the UK , was sent packing in the so-called Glorious Revolution which saw a huge invading armada arrive on November 5th (Yes, anniversary of Guy Fawkes plot) with William of Orange as the new King. His wife, Mary daughter of the executed Charles I of England followed later.

So this little plaque made in the last years of James II and with symbols on it harkening back to the Catholic Church which has endowed the Alms House in the first place, has considerable interest.

Okay final post; the badge for the Archbishop of Landaff, which was Holgate’s title is two shepherd’s crooks crossed. 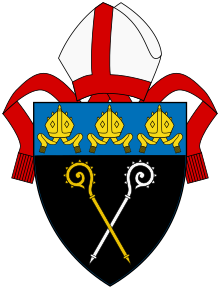 The Bishop of Llandaff is the ordinary of the Church in Wales Diocese of Llandaff. The diocese covers most of the County of Glamorgan. The bishop's seat is in the Cathedral Church of Saint Peter and Saint Paul (the site of a church traditionally said to have been founded in 560 by Saint Teilo), in the village of Llandaff, just north-west of the City of Cardiff. The bishop's residence is Llys Esgob, The Cathedral Green, Llandaff, in Cardiff. The controversial Iolo Manuscripts claim an older fo...

On this badge it is very definitely crossed keys not bishop’s crosiers. 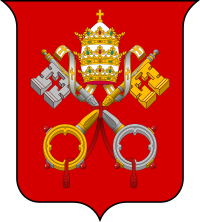 Coats of arms of the Holy See and Vatican City

So not only would the Arms House be interested but the Diocese archivist might want to see it too.

It’s a perfect symbol of the difficulties created for ordinary humans when religious sects start arguing fine points of the liturgy.

All plaques have the initials R.W. For robert wrighton he was Robert Holgate’s lawyer ( he died in 1708 ) and as such had all the plaques made after Robert died as per his will, at the time of Roberts death he was archbishop of York hence the crossed keys 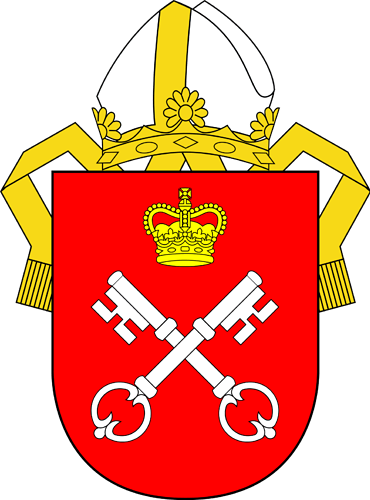