Is this (a) Napoleonic/Empire era silver? and (b) European made ? Oval bowl, heavily gilded interior, on 4 cloven hoof feet each with leafy mount at knee area. Weighs 163 grams or approx. 5.24 troy oz. Assumed as interior gilded it possibly was meant to hold a sauce for the dining table? Its broad rim suggests possibly had a cover. Very well made, hand fashioned and not machined. The feet, oval shape, and general style suggest a circa 1790-1810 era. But the marks have me absolutely stymied. Spanish?
Italian? Corsica ? Gibraltar? Northern/Baltic ? Sicily? Yet seems to have a strong French influence. The town or province/state mark looks almost to be a standing or running horse. Maker mark BM, with likely original owner’s initial of PF scratched below. A model(?) number scratched into base of S54183, and a scratch weight below that which looks to be 9/9/- Any input as to similar marks would be greatly appreciated as think it is about 4 years I have been trying to chase down this mark. 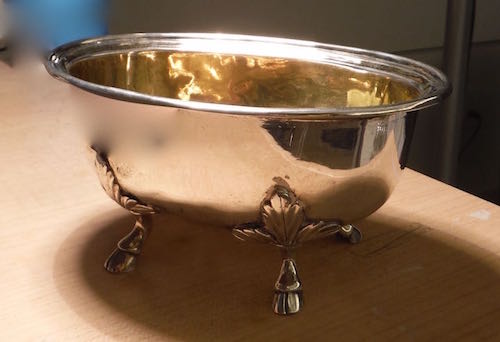