We recently came across a pair of Reed & Barton candlesticks.We have done an exhaustive search in an attempt to find a date or any other info on them. Attached are photos of one of them. The other is similar but not identical. Any help would be greatly appreciated! They are 11.5 inches tall and the base is 5 inches. They weigh 955 grams.
Thank you!
Gary 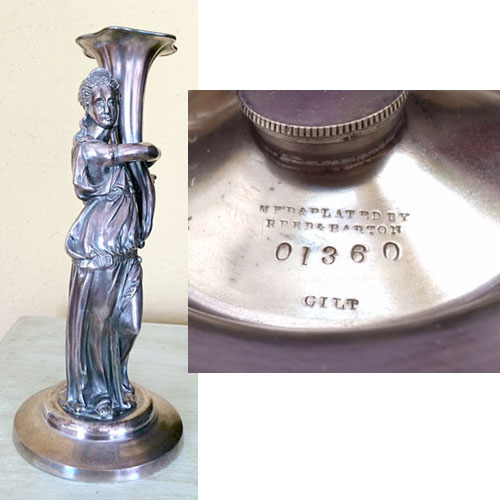 Before focusing on sterling silver from 1889 onwards, Reed & Barton was one of the best quality makers of silverplate in the United States. From the post Civil War period until the turn of the century, they were also one of the largest producers. Many of their pieces were produced “in the metal,” and then sold to large electroplating firms that would then silverplate the pieces and stamp them with their own marks. The marking on your piece is what they put on silver that they both produced and plated in-house. The difficulty is that unlike much of American sterling holloware, which had specific date codes as part of the marks, Reed & Barton used essentially this same mark for the entire second half of the 19th century - leaving us only stylistic clues as to its date. The neoclassical figure on the candlesticks would indicate a likely manufacture from the late 1870’s until the mid-late 1880’s. I’m sorry I can’t be more specific.

Thank you for your help. Are there any books of reference websites that might help us identify a manufacture date or the number produced?