Hi. My mother-in-law (in her 70’s) gave me this Royal Mfg Co., triple plate, warranted coffee pot. She said it was the first antique she ever owned. Her aunt bought it for her…not sure where. She asked me the other day, when we were out enjoying the beautiful fall day together antique shopping, what I thought that coffee pot was made of. It is an unusual dark color, unlike tarnished silver or pewter. I googled the Royal Mfg Co. that is on the bottom of the pot, but came up empty. Does anyone have any information about this company, pot, and it’s worth? I don’t intend to sell it, unless of course, it’s worth a million bucks. Who couldn’t use that kind of money in this economy?! Thanks for your help! Do you answer pewter questions, too?[/img] 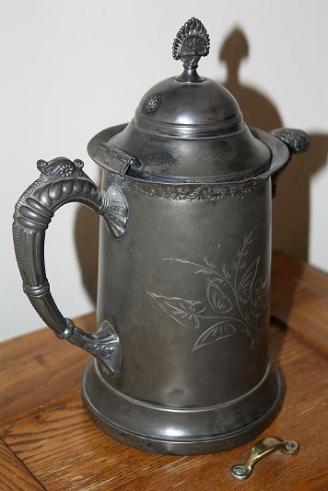 Hi there Alva and thanks for joining us. The pot was made by the Royal Manufacturing Co. of Detroit, Michigan, which was also know as the Royhal Silverware Co. of the same city. It made silver plated items such as your pot, and called them “triple plated”, presumed to mean they were electroplated three times to lay on a thicker coat of silver over - as one of its advertising flyers called the “white base metal”. That base metal was probably “pot metal”, an alloy of tin.

The company was active around the turn of the 20th century. Your pot, like most American silver plated goods of that type, has little commercial value. Polish it up and enjoy it!

Some of the folks that frequent this site now and then have answered questions about pewter, so give it a shot.

My mother-in-law lived in Michigan at one point in time, perhaps that is where she bought it, too. She has fond memories of the aunt who bought that for her, and it started her on a life long love of antiques. I don’t think she has ever been interested in the collectible value, however, as I know she sold in a ‘down-sizing’ rummage sale (before I could drive to her house and grab them) so many expensive antiques for dirt cheap! Oh, and I happen to like the pot the dark color! I’m enjoying it, usually as a flower arrangement pot, as it is! It has more character that way.