hi everybody! i found a beautiful Sheets Rockford embossed handled tray - the silver (plating) seems to be very high quality? and the tray is quite heavy. almost looks like sterling. anyhow, these are the marks. what does the 1875 mean? thanks! bobbie 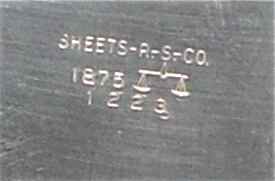