I have a bit of a strange request. I hope you don’t mind as it is a break from identifying an actual hallmark!

The image below is a t-shirt that I have with the Sheffield hallmark, I think for the year 2005. I want to get on made up for the year I was born and if I like it am thinking about getting a tattoo done. I am from Sheffield and like the idea of linking it to my birth year.

I have had a look at a few websites and have found a bit of contradictory information so I’d like to try and confirm the correct hall mark, especially before I put it on my body!

My limited research suggests the lion indicated the country, ie. England, the rose identifies the city, Sheffield and the letter identifys the year.

As far as I can see Sheffield changed its city mark in 1974 or 75 (most website say 1975 but I have seen one saying 1974) from a to the Tudor rose shown on the t-shirt image and was previously a crown. I like the Tudor rose (Yorkshire is the white rose county and it has some good history) in preference to the crown, but would this be wrong for 1974?

Again, as far as I can see, the letter for 1974 is a Copperplate font capital letter G. How is that different to the image I have on the t-shirt? Does the background symbol matter?

Using some pretty small images, I’ve got a copy of what I think is probably the correct hallmark with the crown and the one I’d like with the rose. Apologies that the images are so small.

I also notice that the tshirt and hallmarks I have found have the country mark (lion) and city mark (Tudor rose) in a different order. Does this matter?

Would someone be able to confirm if I have got the hallmark right and if it would still be a correct hallmark to use the Tudor rose in 1974.

Are you also able to point me in the right direct to find some good quality images of the hall mark that I could use to get a t-shirt made up.

Sorry for the probably basic questions.

Thanks for any help you are able to provide. 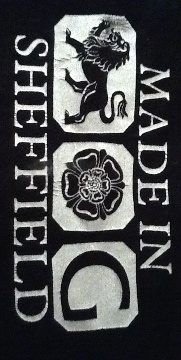 Your illustration of the script G is the 1974 date mark, The rose and letter A were first used on 1 Jan 1975. However before 1975 the assay year did not start on 1 Jan. I am away from my references at the moment and can’t remember what day of the year Sheffield changed their dates; this means of course that you might need to use the previous date letter for 1973/74:

If your birthday is in the first 3 months of the year you can use 1973/74; if it’s from July onwards the G should be OK; I’m just not sure about the intervening months, but if nobody has come up with the right answer before I get home (about 10 days) I’ll post a follow-up. Just don’t get the tattoo done yet!

I don’t think that you are going to find a high enough quality image for your purposes - you may have to create one for yourself.

My birthday is the end of November so hopefully the letter is correct. I’m away myself for the next couple of weeks so will check in again when I get back. Thanks very much for your help

Sheffield date letters changed on the first Monday in July up to and including 1974 so G is correct for you.