Hello, I have 2 similar cigarette boxes that I’m trying to find the maker of. They are quite old, given to my father in England.

One is large (554g) and I will attach photos of this one first, then I will take photos of the smaller one that is 354g and do separate posts so they aren’t mixed up.

The large one was purchased at Thornhill & Co and is marked as such on the back (see photo)… it is also marked 144 & 145 Bond… which may be the address.

I can see the sterling lion, a lion face straight on (which i think is London), a womans face facing to the left (which i think is duty mark of Queen Victoria I. Seems to be a capital H in a shield as well, which could be date of 1883. I’ve done a lot of research but am clueless as to the maker.

Any help is greatly appreciated. Since I had to compress the photos they are harder to see. If you need further photos please let me know, I have taken a dozen pictures.

I will also post the 2nd box I have a bit later. 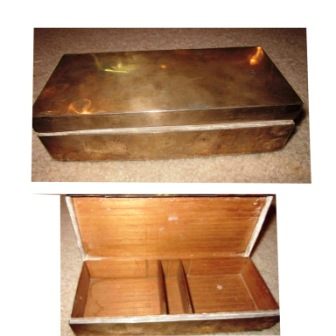 Thanks for joining us. Unfortunately your pictures don’t show a maker’s mark so I can’t answer your query. It undoubtedly had a maker’s mark at the start of its life (yes, London 1883 is correct) but it must have been polished away. I note a lot of wear to the hallmark so if the maker’s mark was not deeply stamped it could well have disappeared over the years.

Incidentally I think you may have over-compensated in the sizing of your images. this site is quite happy with a maximum dimension of 500 pixels.

Thanks for the reply.

I tried this again, I used my MAC magnifier in the first photo, then used the suggested picture resizer that’s listed on this site to resize it to 500 pixels… Then the side was polished… and resizer was used… are these any better? The last letter of the maker looks like a capital H or an M to me but I can’t be sure… thanks again. 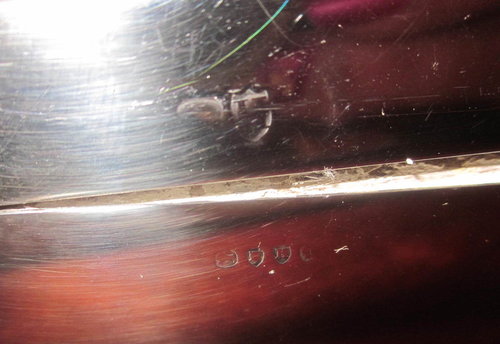 No, that’s a repeat of the date letter. The maker’s mark would have been to either the left or right of the main 4-punch hallmark.