A limited edition (one of 5000) wooden-boxed set of nine sterling silver medals from the Birmingham Mint, 1977. They are entitled “Queens of the British Isles”. Each medal shows a queen’s head, name and dates on one side and a crown set in a “Queens of British Isles” circular title on the other side (except QEII’s, which shows the Royal Family’s coat of arms). They are each approximately 4.5cm in diameter, 4mm thick and have a mass of 49g. The edge of each shows a hallmark comprised of “BM”, an anchor, the lion passant and “C”.

A golden-coloured sterling silver medal commemorating the “State Visit of Her Majesty Queen Elizabeth II to the USA Bicentenary 1976”, mounted in a black padded plastic wallet, together with an accompanying postage stamp (Benjamin Franklin). The coin and stamp are mounted together on the COA, which has been rubber stamped “First day of issue, Philatelic Bureau Edinburgh, 2 June 1976”. Slightly smaller than the Queens medals, with a mass of 30g-40g (difficult to tell – sealed inside the QOA with the stamp). 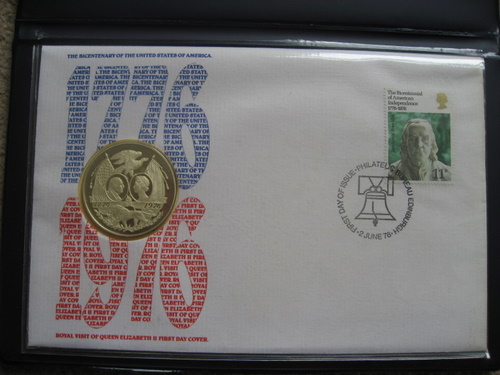 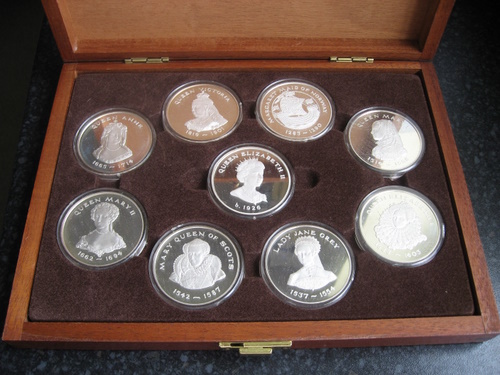 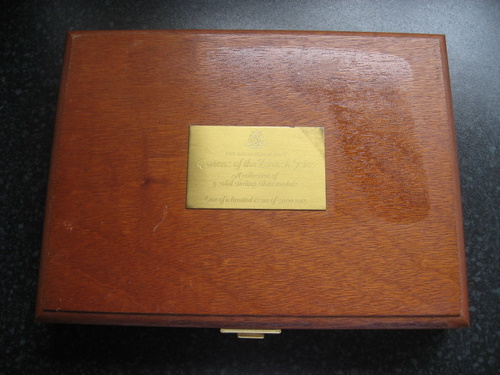