Silver tea pot been on quite journey, help identifying

The attached tea pot and not shown its accompanying sugar bowl has been on quite journey. About ten years ago my wife’s grandmother’s, mother’s house in Italy was being cleaned out and some belongings were shipped overseas to local family living in the United States.

My wife’s mom distributed the belongings to her kids and my wife was given a tea pot and sugar bowl. She did not know what to do with it as it was badly tarnished and it remained in the back of the buffet another few years.

About five years ago we showed it to my Uncle who owns a plating company and offered to silver plate it for us. Unfortunately, after plating it got misplaced in the plant and after two years it was discovered and returned to us. Then my wife misplaced it for another two years. Recently we were detrashing the garage and found it wrapped up in a box. Finally, it has a safe location on display in our house.

I spent several hours on the Internet this weekend trying to figure out who made it and when. I could not find anything remotely related to this. I don’t know where it was made, but I can say it’s last stop before coming to the United States was Italy. Any expert opinion is appreciated. 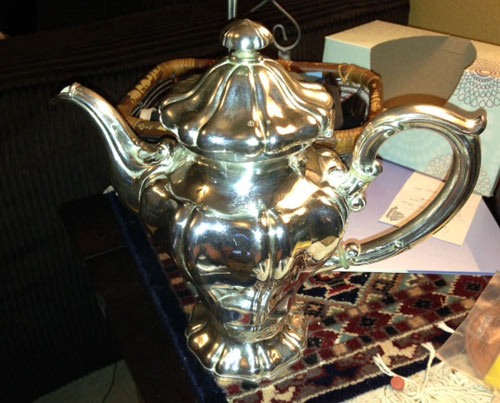 You probably don’t need to look any further than Italy. 800 was a common Italian silver standard. Although there was a national system of marking it was not mandatory and many silversmiths just used their own mark and a numerical purity mark as on this tea pot.

I am not sure why it needed to be replated as it was not plated in the first place being solid silver, if only a relatively low grade.

I tried to clean it up and it wouldn’t. It was as if something had been sprayed over it at one time. My uncle stripped off whatever it was and plated it. He did it for no charge as a gift.

Any idea what the marking other than 800 represents?