[color=green][color=darkblue]I’ve talked to a few people on this coffee pot. They told me that this silver pot is definitely from the 1700’s, they were thinking earlier 1700’s. There is no silver hallmark on the bottom. There is a signature “H. Taylor” which looks like someone who engraved it that owned it maybe? It is strange because the coffee pot has engraved on it, “1793”. They said it was a mystery because 1) they thought the coffee pot was older than 1793 and 2) they thought the engraving of that date looked like the way engravings were made at a later date. They said it was definitely either sterling or coin silver. Worth $3-5K without knowing who fashioned it.

Several people have said it was a great piece. I would like to sell it, I am not sure how to go about it and how much it is really worth. I would love to compare it to some silver makers of the early 1700’s.

I had one person tell me it was American and another that said it could be American or English. I haven’t seen any similiar work as is on the base of this coffee pot.

Anyone have thoughts on worth or maker or the best way to go about selling it? By the way… I would never sell it save needing money right now. I love having it, even though ti is something I found myself. 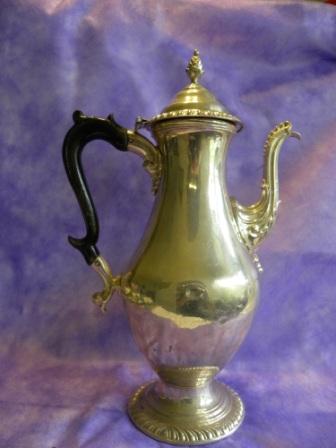 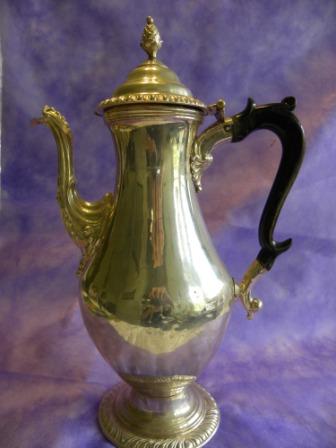 Your coffee pot is certainly in a style which was introduced in the early 18th century. However this gadroon form has remained popular and similar pots are still being produced today. I would be very wary of assuming that this is solid silver without having it properly tested. It is normal that silver has some sort of indication of quality such as a hallmark or a number indicating the fineness (e.g. 925 for sterling). Without such assurance you could only sell the pot as silver plate when it would be worth very little and certainly nothing like the figures you are suggesting.

Thank you for your response. This is what the silver expert from Bonham and Butterfield gave me as an unwritten quote. (On their once a month Wednesday quotes). I don’t remember anything about what he said about having it tested. But he did say that it was worth $3-$5K.

But your information is probably what I need. If I do sell it, I should probably try to go through them or get an written appraisal before hand.