I would like to know when this was made, any info really. Thank you 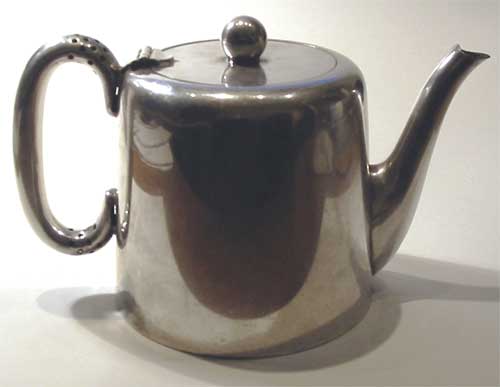 looks like walker and hall
Walker & Hall.
The firm was established in Sheffield (UK) in 1843 by George Walker.
Henry Hall joined the partnership in 1848 and the company was known as Walker & Hall in 1853.
The famous trademark of the flag was first registered in 1861. In 1892 Walker & Hall bought the manufacturing silversmiths, Henry Wilkinson & Company.
The firm was managed by Sir John Bingham, Hall’s nephew, until 1916. He was succeeded by Sir Albert Bingham.
In 1963 Walker & Hall combined with Mappin & Webb and Elkington to form British Silverware Ltd., which closed down in 1971 due to industrial action. Walker & Hall was later revived as a retail firm.
Its hallmark is a triangular flag with W & H.
The coffee pot is 8 in. high (cm. 20) and was bought

Thank you very much ‘maylug’. Your info trailed off with
“The coffee pot is 8 in. high (cm. 20) and was bought” , looks like there was more to read. Intriguing.