Hello everyone, I have had this set for approx 20 years. I know though, that it was second hand when given to me. I suspect it is somewhere between the 1940’s and 1960’s in age? I have tried to found info on the web about it, but apart from the fact that it is silver plate, I can’t find much else out. I would like to know the age if possible and approx value. The cake serving knife (I think it is) has a slightly different hallmark than the fork and spoon. The fork and spoon both have a K after the S, but the knife has a J after the S. They all fit into the case and appear part of the same set. Any idea on why there is the different letter and what it stands for would also be appreciated. The bright yellow marks; on the spoon in particular; is just a reflection…I need to read the section on photographing silver. Thank you for your time, Ted 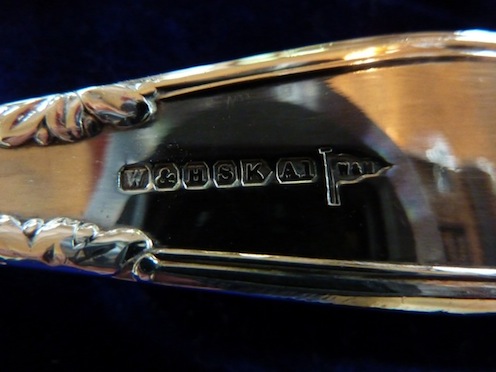 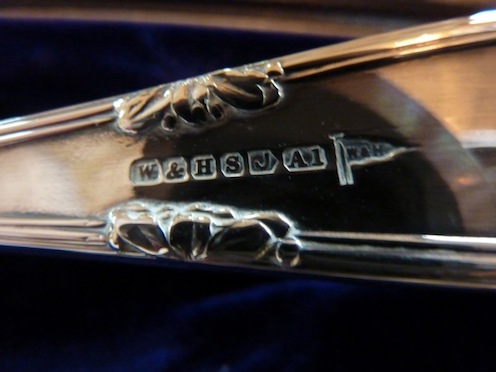 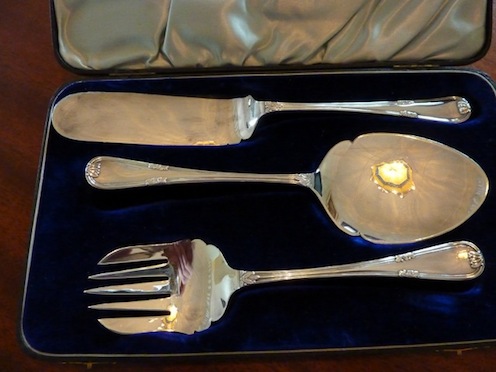 The J and K are Walker & Hall’s own date code letters for (I believe) 1937 & 1938. The difference, only being one year, is accounted for by the manufacturing dates being spread across the year boundary.

Valuing electroplate is difficult as there is no intrinsic value due to silver content. A similar set, but unboxed and probably not as old, sold recently on eBay for £31. In my opinion yours should be worth more, assuming it is in good condition.

Thank you so much for the information and fast reply. My set is in good condition (no rust spots, the silverplate is all complete, box has some light scratches to the outside but interior is still nice. ( not really sure on correct grading for such items )…anyway, that is the sort of the value I expected and the difference in date marks now makes sense.

I’m more interested in solid silver, but it’s nice to know more about it. Thank you again, Ted P.S. If it was solid silver it would obviously have value based on that, but from a collectors/investors point of view, is it usually only solid silver items (age, manufacturer, style etc being of course extremely important), that generally is worth value, ie: is silver plate ever worth collecting from a investment point of view?

Hello Ted. I would like to join in here with a view on silver plate as an investment. As little as 10 years ago silver plate was dismissed out of hand as worthless. I still hear people saying that it is “only silver plate” at antiques fairs and in antiques shops. However, there is no doubt that ‘Old Sheffield Plate’ is a good investment, especially if it is by a good maker such as Matthew Bouton. Even this can still be found at a good price, as its true value is often unknown. Now that silver prices have risen dramatically, early electro-plate is being looked at and recognised as a worthwhile and genuine art form in its own right. Manufacturers such as Elkington, Walker & Hall and James Dixon, produced pieces to emphasise that this new process was not just a less expensive alternative to solid silver, but a legitimate manufacturing field to be experimented with and with which to produce outstanding pieces. In short, they were showing off what could be done with this new phenomenon.

There are some outstanding pieces from the early years of electro-plating, mainly the second half of the 19th century. Pieces such as Elkington’s epergnes and electrotypes that are well worth buying for investment. Later pieces such as those deigned by Christopher Dresser for Hukin and Heath and Martin, Hall and Company are already fetching high prices.

The collecting of early silver plate is a growing field, as people realise that it was not just a ‘cheap alternative’ and it would be a good time to look towards that field for anyone with a budget that does not stretch to solid silver tea sets or Queen Anne tankards.

Sorry, I forgot to add, that pattern of your W&H serving set is ‘Laurel’.

Thank you again for your help and information about silver plate. I thought I had replied earlier but must not have selected submit properly. Cheers