Never seen anything like this before so if someone could tell me what their official term and use is it would be much appreciated.
Length - 221mm
Scoop lengths are 70mm and 85mm. The shorter of the 2 is wider at 16mm and the other 13mm.
Any input would be appreciated 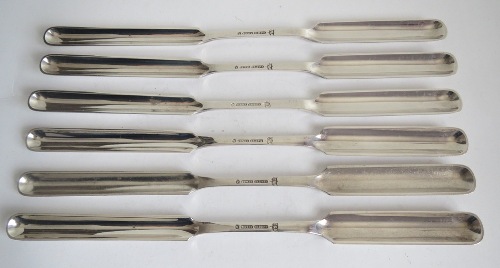 They’re marrow scoops, originally intended for removing the marrow from the inside of a bone; it was a delicacy and many silver marrow scoops date from the 18th century. The differing sizes of the scoops at each end was a standard feature for tackling different sized bones. These scoops, which come from the early 20th century, are anachronistic and may have been intended for something else.

Despite the use of the word “Nevada” these are British; D&A is Daniel & Arter, a Birmingham company. Nevada (or Nevada silver) refers to the base metal alloy from which they are made. It is a white metal which is not so obvious as the electroplating wears off.

Thank you very much for the info, much appreciated