What Electro Plate is this

Hi and thanks for any help you can advise me of.

I had a quick browse of your sticky and help on identification but nothing appeared to be fitting what I have. I am new to this and it is a bit of information overload.

To give you a little background, I work in a charity shop and we get items from time to time that are silver, I generally pick up on this whereas others don’t like the collectors bangle with trinkets on it that was a mix of German and Italian silver with British Sterling silver.

We had a donation and it contained some silver that was a mixed bag of what I call generic shiny shiny wears as they were just nice looking shiny silver, one was a candle holder and another looked like some kind of sacrament plate on a stand, one was definitely plate silver from Spain and very modern as it has “Made in Spain” on it.

One item was a rather heavy silver electroplate vase, standing 10" tall and the markings I could only just make out as in the image.

Whilst I was not in the shop, the manager was cleaning the vase and other silver items and someone expressed an interest and offered to buy the items.

So I am more curious as to where and what the date letter dates this piece at, its not been looked after
that well, it may not be worth much but I would be interested to know as much about the piece as possible so we can decide on whether or not to put the item in the hands of someone who would buy it for its marketable value and not some Del boy deal

Any advice is appreciated. 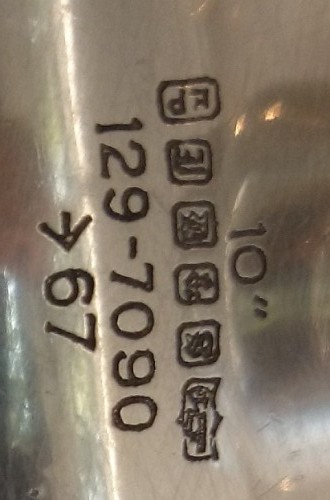 No date letter on this piece, I’m afraid, so it’s as undateable as most other electroplate. EP of course means electroplate. The next bit is the manufacturer’s mark, JD&S, for J Dixon & Sons, a Sheffield company, and the trumpet is their trademark. The numbers are most likely a pattern ID.

Thanks for the reply.

This piece is really heavy and I am wondering what metal it could be underneath, the piece has scratches and dents but no colour shines through.

How thick can electroplated silver be on heavy pieces of work.